The Pros and Cons of using App Discovery Services

I was lucky enough to be approached by AppTurbo shortly after my game Directional Dash was released. AppTurbo are a app discovery service, they are one of many currently on the AppStore. AppGratis made huge headlines earlier in the year for being banned for doing the same thing so getting an invite to their service was a huge buzz for me.

App discovery services are a powerful way of getting your app or game to the masses, they promote your paid app as a free download for 24 hours. People flock in from all over the world and grab your product (because they will download anything if its free). Usually you would pay thousands of dollars to get access to their user base, but on this occasion I was fortunate enough to get a good deal, you should approach them yourself for a good deal.

Sound great, sure, it is but it has its downsides.

Downloads! Lots of them.

During Directional Dash’s free 48 hour period, AppTurbo blasted us with over 45,000 brand new players. Directional Dash was only promoted in Italy and Germany too, they have tons of other countries on their books too. That number is insane and something I could only dream of previously. You just can’t fault the numbers. 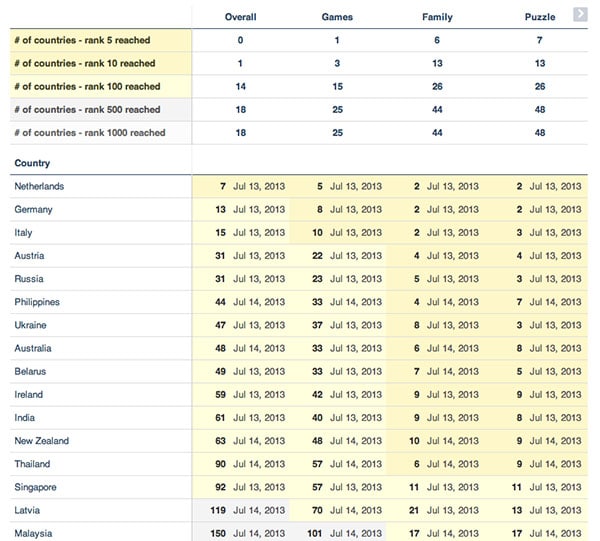 Oh I love a good stat and going to the top of the Puzzle / Family charts in a number of countries is a great thing to achieve. Directional Dash even got to the number 1 slot for Puzzle/Family in the Netherlands (Although the above AppAnnie chart doesn’t show it at number one, which is strange. Applyzer has different stats, showing my game as number 1.)

Luckily I took a screen shot.

Getting ranked ‘overall’ is also a huge buzz, I got additional media coverage which would not of normally happened. In my experience getting the press to write about a little one man studio who hasn’t had any commercial success is very tough. I’ve had some minor breakthroughs and cherish every single word.

I got a mention on Razorian Fly which was a huge boost for my download figures.

Doing a google search for “Directional Dash” now shows 23,200 results which has to be good for SEO and discovery.

Some would say that this could be in the Pro category too, but the reason why I added it to the Cons is that I receieved a large number of negative reviews. Now i’m very aware that my game perhaps isn’t the most polished game, I’m aware that its on the cheaper side of development and I’m aware that its not perfect. But one thing that has stood out to me in the past is that the core concept is a good one and i’ve had hundreds of accounts of people being addicted to it.

I feel the negative reviews have come from appealing to the masses, not everyone likes to play puzzle games. My wife can’t play my game, it’s just not her thing and I think the same applies to a ton of the downloads I achieved.

I got comments like ‘Not worth it’ and ‘Annoying’ which are fine if they justify a reason, but no – It’s just the way it is.

I did get some positive reviews. Just more negative which could be seen as a step backwards.

Yep it happened, my beloved game which I have spent thousands of pounds developing has been hacked and cracked, and available for free for jailbroken devices. I’m sure there are ways to avoid this happening but alas, it happened. I’m not cross, just disappointed. £0.69 is a huge investment right?

I feal it got hacked because of yep… appealing to the masses, the more people who knew about it the higher the risk it would fall into the hands of someone who thinks it would be a good idea to rip off an indie developer.

Not AppTurbo’s fault, but its a risk when your game/app is opened up to thousands of new people.

My Game Center leader board is now pretty much useless, one player has registered an illegal score, pushing all my dedicated players down in Game Center. As far as I know there is nothing I can do, just appologise for someone taking advantage and spoiling everyones fun. Plus the more people play the hacked version, the more illegal scores will be submitted. I fear it’s only going to get worse. But this is no way AppTurbo’s fault.

If you get the chance then go for it, its a great way to expand your network and get a ton of new players/ users of your app.

Dealing with AppTurbo was a pleasure, Mariana was lovely and I wish them the best success, I fear that Apple will target them next, just as they have targeted AppGratis.

Once these services disappear (as i’m sure they will) it will be harder and harder for indie developers to get any form of success.

Amazing Colour Resources for Designers As a designer I should be better at using colour, I think we’re all guilty of “sticking t...

END_OF_DOCUMENT_TOKEN_TO_BE_REPLACED

How Twitter improved me as a freelancer UI/UX design is a commonly used term now, but when I first started out designing apps, websites and ...